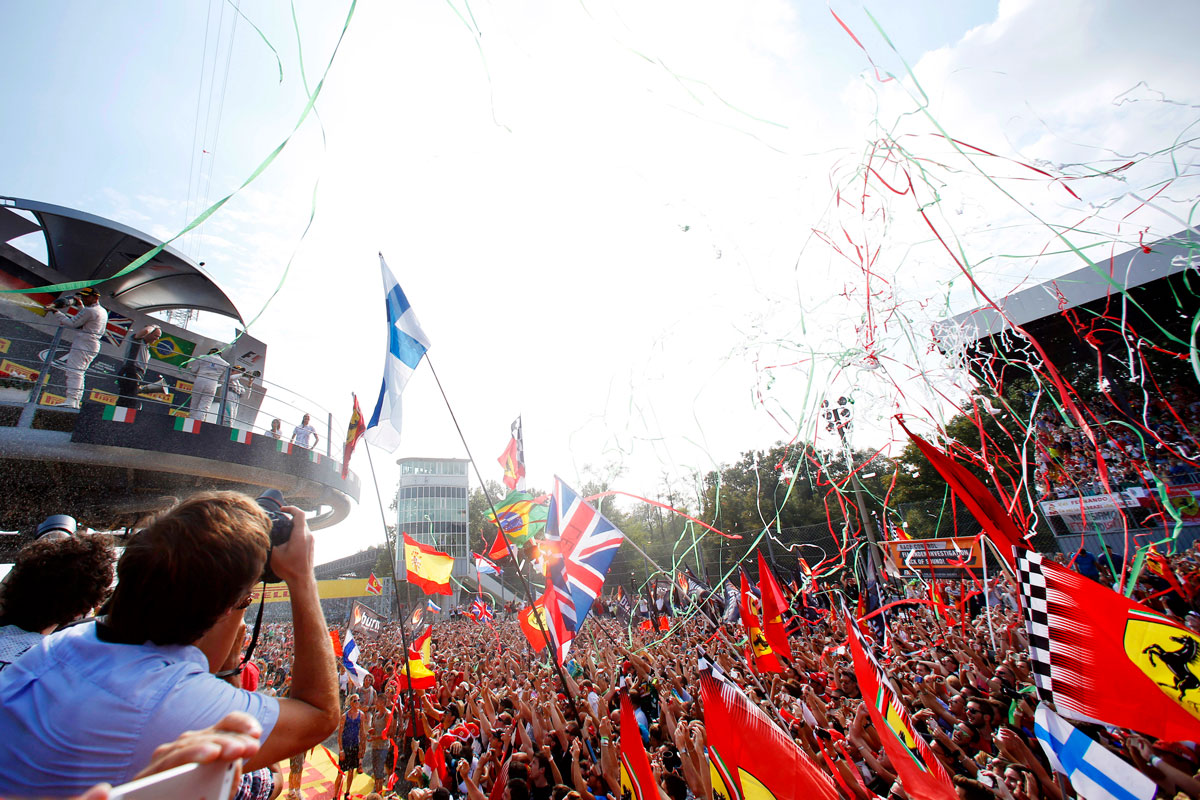 The Italian Grand Prix, held each year at the historic Autodromo Nazionale Monza, has become one of the most popular and iconic Grands Prix on the F1 calendar. Its atmosphere is often regarded as one of the best in F1 and it’s long been considered as the spiritual home of the legendary Ferrari support, known as the ‘Tifosi’.

It’s one of only two Grands Prix (the other being the British Grand Prix) to have been a part of the Formula 1 world championship each year since its inception in 1950. To put it simply, there’s simply no better race to visit than the Italian Grand Prix at Monza for a pure blend of drama, passion and history.

The iconic Autodromo Nazionale Monza Circuit is steeped in history due to is longstanding place on the F1 calendar and its deep-rooted association with Italy’s legendary team, Ferrari.

At just shy of six kilometres long, Monza features one of the longest straights on the F1 calendar and some of the highest top speeds of any circuit in world motorsport.

In qualifying for last year’s race., Ferrari’s Kimi Räikkönen delighted the home crowd with pole position, but more significantly, his lap broke the record for the fastest ever lap in F1 history.

At an average speed of 263.6 km/h (163.8 mph), Räikkönen’s mesmerising lap of the Monza circuit showcased the outstanding performance characteristics of modern-day F1 cars and showed why the Italian Grand Prix is simply the best race of all to witness F1 cars being pushed to their very limits.

Monza has played host to some of the most memorable racing moments in recent decades but perhaps none more so than during the 2008 Italian Grand Prix.

Sebastian Vettel shook the F1 world by becoming the youngest Grand Prix winner in the sport’s history at the wheel of a Toro Rosso, which to this day remains the Italian minnows’ one and only F1 win.

In tricky wet conditions, the then 21-year-old Vettel secured one of the most remarkable Grand Prix victories of all time and immediately marked himself out as the future champion he would go on to be. 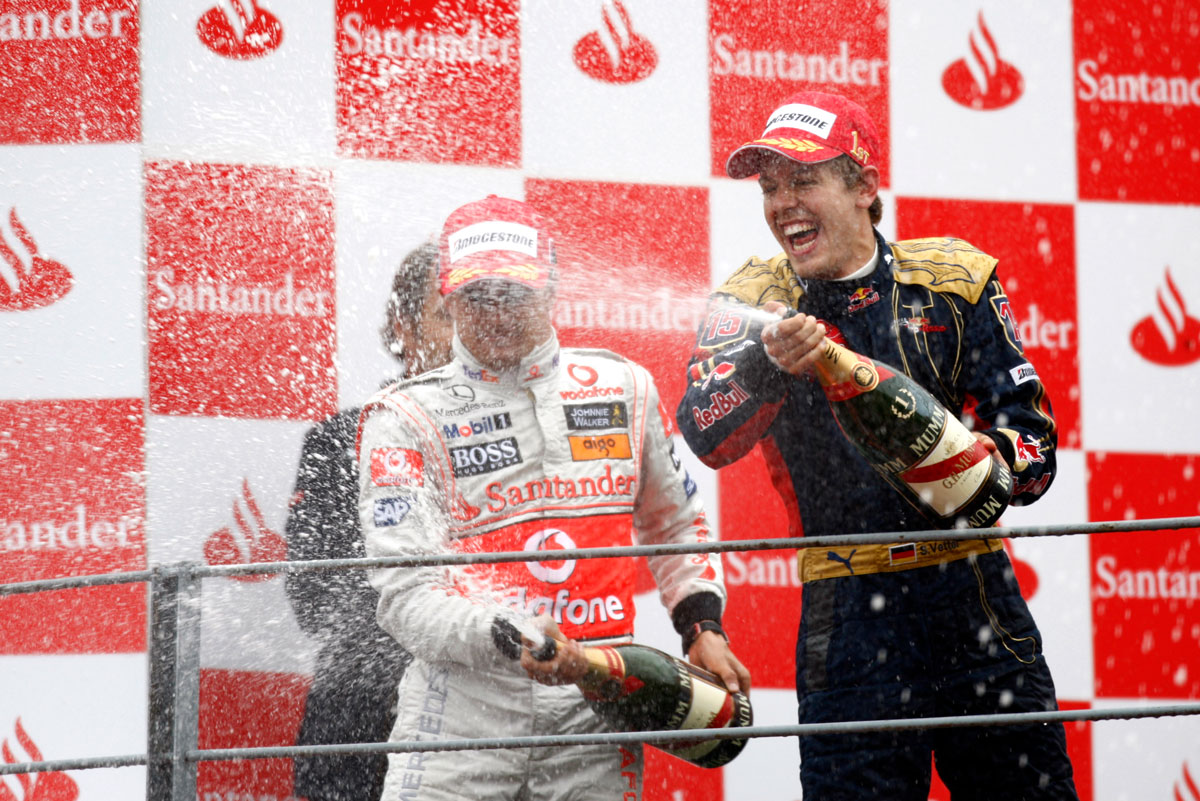 With Ferrari’s most recent Monza win coming back in 2010, their passionate home support have been starved of success since their dominant run of seven wins in 10 Italian Grands Prix between 1996-2006.

Perhaps the first win in that run will be remembered the most fondly at Maranello, as new signing Michael Schumacher cemented his place in the hearts of the Tifosi with a surprise win that sparked scenes of delirium amongst the watching crowd.

Schumacher’s main rival throughout much of that period was McLaren’s Mika Häkkinen, and while the German collected no less than five Italian Grand Prix winners’ trophies during his career, Hakkinen blew his best to chance to win in remarkable scenes back in 1999.

While leading the race at just over half distance, the Finn selected the wrong gear approaching the first corner Variante del Rettifil, locked his brakes and spun off into the garage. Just moments later, television cameras caught sight of Häkkinen slumped amongst the trees and overcome with emotion.

He later revealed that mistake and his subsequent failure to win the Italian Grand Prix to be amongst his greatest regrets.

F1 Experiences’ Hero and Trophy Ticket Packages provide fans with premium hospitality and exclusive benefits throughout the course of the Italian Grand Prix weekend at F1’s ‘Temple of Speed’.

With a 4-Day race ticket, you’ll have the chance to see the teams and drivers up close as they prepare their cars for the weekend with the F1 Experiences Exclusive Pit Lane Walk; an exclusive not provided to general race ticket holders.

Allow our expert circuit guides to talk you through the intricacies of the challenging Monza circuit turns with a Guided Track Tour, before heading back for a photo with the official F1 Championship Trophies on the famous starting grid.

A 3-Day Grandstand is included with a choice of great views between the super-fast Turn 11 (Parabolica) or a spot on the Main Straight with views of the legendary Monza podium ceremony.

Hero and Trophy guests will also get the chance to experience a unique tour of the pits and Paddock with F1 Insider Access, stopping at iconic locations such as the drivers’ cool down room, press conference room, Pirelli tyre station and the Safety Car garage where you’ll meet well-known F1 Safety Car driver, Bernd Mayländer.

As guests of the F1 Paddock Club on Friday evening, Hero and Trophy guests will have the chance to quiz popular Haas F1 driver Romain Grosjean on his lengthy and varied F1 career in the setting of F1’s most exclusive hospitality suite.